The majority of orthopedic experts and Chiropractic physicians believe the stiff-legged style of lifting to be dangerous is quite correct. Although this brief article is too limited in scope to detail the mechanics of the lifting process, the discs between each vertabra are exposed to high forces of compression. However, one of the overlooked factors when lifting with so-called straight legs, is that the stiff-legged deadlift, if done properly, is not actually done with “stiff” or straight legs.

Pelvic rotation around joints of the hips is an extremely important phase of any type of bending sequence. If the knees are kept “locked” while flexing or bending forward at the waist, the pelvis will not rotate properly, and will in fact, cause excessive force in the lumbar region. One must bend the knees slightly and maintain that slightly bent position throughout the entire performance of a set of stifflegged deadlifts. This means that the knees do not straighten at all as one nears the upright position, and that conversely, the knees do not flex or bend as the weight is lowered. Of the most common mistakes made during this lift, completely straightening the knees at the extension phase of the lift, or in fact, holding them locked throughout the lift or set is one of the most serious and damaging. Another is the tendency to bend the knees more than their original amount as the weight is lowered, which eventually and inevitably leads to a mispositioning of the weight itself.

As one lifts a heavy object, the forces upon the spine and its elements increase as the resistance is moved further away from the center of gravity or point of rotation. One must keep the barbell as close to the body as possible throughout the entire lift, and the entire set. We actually drag the bar up the shins, knees, and thighs, and lower it essentially in the same way. At no time does the weight “swing” away from the body. In order to maintain such careful control of the weight, the movement must be done relatively slowly. This in turn reduces the shearing and compressive forces, but again, this takes practice and control. 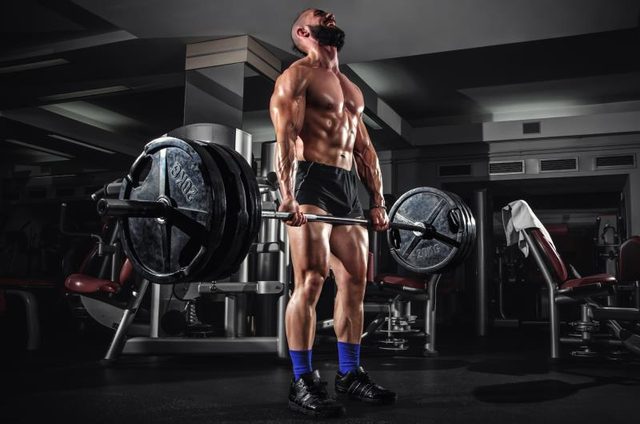 the most important factors relative to lifting heavy weights, is the ability to set one’s mind properly for the task at hand. This too takes a lot of practice. The stifflegged deadlift puts the body at certain mechanical disadvantages, thus, one has to be prepared to exert more force as the weight leaves the instep, and be able to properly and safely decelerate as a position of normal lumbar extension is achieved. Moving too quickly at the top of the motion, or hyper-extending, can damage the facets and/or spinal ligaments. We stand on top of a sturdy box which allows the lumbar spine to go through a full range of motion, and the first repetition is started in a “conventional” deadlifting manner(and yes, we count that as “one”).

Despite the disadvantages, I believe that if one does the stifflegged deadlift correctly, it can be an effective muscle and strength building movement. There are many points which must be emphasized: obtaining a full range of motion, moving the resistance under careful control, decelerating as the lumbar spine reaches normal anatomical extension, keeping the bar close to the body as possible throughout the entire movement, maintaining the proper degree of knee flexion, and correctly and accurately setting the mind to exert force in the proper sequance in each phase of the lift are all skills that need to be practiced. This exercise can prove to be benificial to those who do not have a history of injury, or anatomical limitations which would prevent the proper and effective performance of the movement.